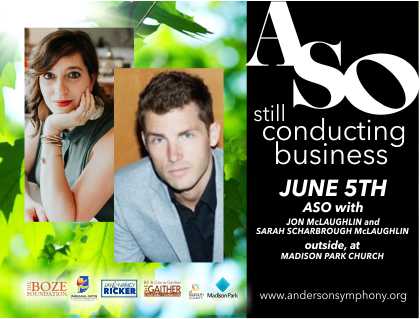 Hometown legend Jon McLaughlin returns to the ASO with sister-in-law Sarah. This concert will highlight new and memorable music you will love with two incredible performing artists. This last decade has taken Anderson native Jon McLaughlin around the world. From the Academy Awards, to sharing the stage with Billy Joel, Adele, Sara Bareilles, and Kelly Clarkson he’s been bringing his music from one end of the earth to the other. Sarah’s voice can be heard on local and national commercials and has been featured on two Emmy Award-winning TV series. She has collaborated and performed with Grammy Award-winning artists and countless others.